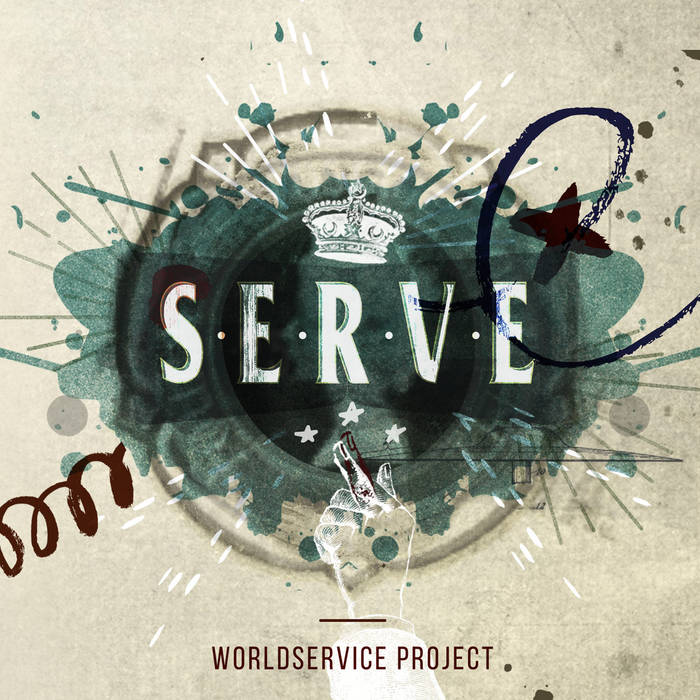 As a follow-up to 2016’s For King and Country, World Service Project delivers another powerful punk-jazz manifesto with a sly grin on Serve, their second RareNoise release and fourth album overall. Showcasing their signature blend of discipline and chaos, the edgy London-based avant-funk quintet combines throbbing grooves, huge backbeats, grinding fuzz-bass onslaughts and ferocious free blowing on eight potent tracks, with just a dash of Monty Pythonesque’s irreverence thrown into the mix. The album will be released on April 30th and will be available on all formats.

“WorldService Project is a very intense, high-energy live show,” says keyboardist-vocalist and principal composer Dave Morecroft, who is also the creator and artistic director of London’s Match&Fuse festival. “We throw ourselves into it and hope to come out alive at the other end. And if you're not bleeding by the end of it, you haven't tried hard enough.”

You can feel that kind of intensity on the fusiony opener, “Plagued With Righteousness,” the slamming “Dai Jo Bo” and the Zappa-esque “Ease.” WSP offers pointed takes on Trump, Brexit and the state of the world on the cathartic, politically-tinged “Now This Means War,” which has Morecroft delivering the chilling message in English, French, Italian and German. And the sinister Mr. Giggles, previously heard on 2013’s Fire in a Pet Shop and 2016’s For King and Country, makes a return appearance on the frightfully raucous “The Tales of Mr. Giggles.” As Morecroft explains, “Mr. Giggles is a clown character who has been featured in live shows since 2013. I adopt the character for a theatrical moment in the set, and its gone down a storm particularly in other parts of the world (China, India, Japan etc.). He is a mischievous character who may or may not eat children. I wanted to flesh out his story a bit more on this record, take the narrative surrounding him to the next level by addressing society, the 'norm', bullying, mental illness and so on.” (Find the lyrics here: www.worldserviceproject.co.uk/who-is-mr-giggles).

Rounding out the World Service Project cast on Serve are tenor saxophonist Tim Ower, who erupts with fierce abandon on “Runner” and “Now This Means War,” trombonist Raphael Clarkson, who offers unbridled solos on “The Tales of Mr. Giggles” and “Ease,” bassist Arthur O’Hara, who fuels these jams with his heavy-duty, fuzz-inflected lines, and drummer Harry Pope, a powerhouse player who grounds the mayhem with slamming authority while also showing his jazzier side on “Runner” and the haunting closer, “False Prophets”.. Morecroft explains, “We did a lot in post-production as well, as the keys are often the instrument that give that 'base colour' to each track. We worked with (producer) Liran Donin on this record and he was fantastic in getting a great sound in the studio and then enhancing that in the mix.”


As for the tag of ‘punk jazz’ that has been associated with World Service Project since their 2010 debut, Relentless, Morecroft opines: “We've adopted 'punk jazz' because for us the 'punk' represents an adjective more than a genre. We are the punky, underground, do-or-die, DIY side of UK jazz for sure, and the music and the live show is also becoming increasingly more political/anti-establishment, so there is that too. I think generally people are moving away more from labels or genres overall, I think, which I welcome. So, essentially, I'm happy for people to call it whatever it means to them! Its certainly provided some amusement for us in the past. WSP began much more in the 'jazz' arena than it is now, and in a way, I think this is what I wanted to form — a jazz quintet but playing modern music that had a different sound. As time went on, I just reacted to my musical influences and what each member brought, and I grew in courage and conviction to do what we're doing now.”

The band’s flexible, turning on a dime nature is perhaps best reflected on the closer, “False Prophets”, which builds slowly from an understated intro with drummer Pope displaying some sensitive brushwork against haunting vocals to a grandiose, pulse-quickening crescendo. “False Prophets “is, for us, an incredibly powerful journey to go on, and in a way was one of the hardest pieces to get together,” says Morecroft. “I think that 'turning on a dime' thing is something I've always admired in other ensembles, and again reflects some of my personal qualities, being a Gemini. I think the flexibility of the ensemble is also due to the fantastic musicians that they are. We all have a unique set of diverse influences, and in a way, we’ve been teaching each other all of these on the road and at gigs for the last couple of years, which I think has resulted in this album. And all the guys are open-minded musicians and incredibly talented, so I'm very lucky in that respect.”

WorldService Project are the leading specialists of ‘punk-jazz’ and have toured extensively through the UK, USA, China, India, Japan and Europe, receiving stellar reviews across the world for their third (For King and Country) and fourth (Serve) albums released on the highly prestigious RareNoiseRecords.

Bandcamp Daily  your guide to the world of Bandcamp

Benji B talks about his new compilation ‘Deviation Classics’