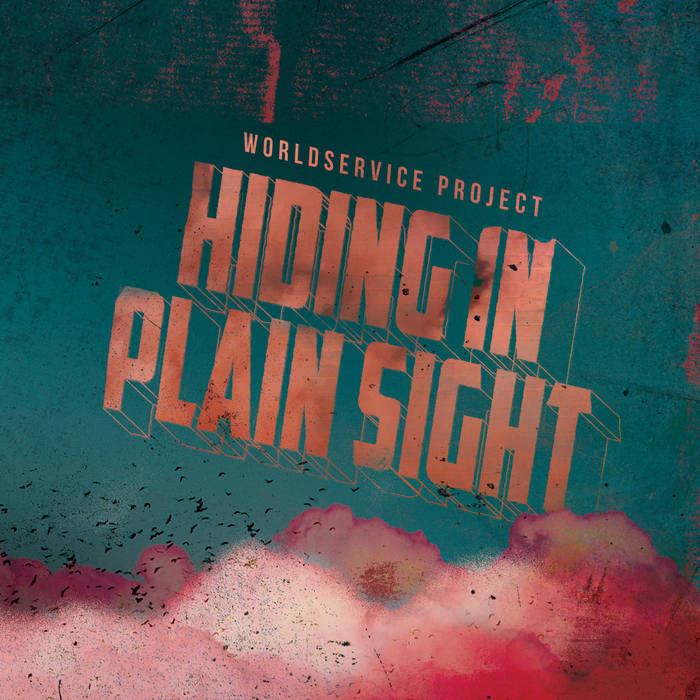 afuture-moose Between Deeper and Onward there is so much, the two tracks I mention have differing but great grooves and are my favourites so far.... Overall for me sort of prog meets now, with a beautiful quality of recording of the instruments. Dare i say hint of the 70's band Backdoor here and there... maybe... Love it..! Favorite track: Deeper.

Over the course of its previous four albums, UK punk-jazz outfit WorldService Project carried its keen-edged, window-rattling irreverence across the globe, casting an eviscerating glance inward while spreading its message of chaotic compassion to the scattered remnants of the former British Empire and beyond. With the release of the gleefully anarchic Hiding In Plain Sight, the band’s fifth album and third for RareNoise Records, keyboardist-vocalist Dave Morecroft takes on his native land from an outsider’s perspective for the first time, having decamped for Rome in his own personal Brexit.

Not that the romance of the Eternal City has dulled Morecroft’s incisively funky edge, however. Hiding In Plain Sight combusts with the band’s trademark blend of free-jazz pandemonium, pulse-quickening grooves, daggers-drawn sardonicism and audacious punk abandon. The album perfectly channels the meltdown of modern civilization into a cathartic dance party on the far edges of the lunatic fringe, with an open-armed embrace of all comers save the power-hungry few that led us into this mess in the first place.

For this latest incarnation of WorldService Project, Morecroft assembled a streamlined group that adeptly navigates the composer’s perilous straits between taut avant-funk discipline and feral improvisatory blowouts. Bassist and vocalist Arthur O’Hara has been a mainstay of the band since 2015, though the remainder is an alchemical admixture of newcomers: saxophonist Ben Powling, drummer/percussionist Luke Reddin-Williams and, on four of the album’s nine tracks, trombonist Kieran McLeod.

Together they summon a sound that walks the tightrope between precision avant-funk and free-form exploration, bridging eras between UK punk-jazz breakouts of the 00s (Acoustic Ladyland, the F-IRE Collective) and the modern psych-jazz grooves of The Comet Is Coming and Sons of Kemet.

The meaning behind the new album’s title is (at least) twofold, though in both cases representative of formerly muted voices suddenly upraised as societal cracks become shatteringly exposed. On the one hand are the underdog heroes, as represented by WorldService Project and its like-minded compatriots around the world, whose message of unity and kinship has been drowned out for far too long.

“We’ve always been here,” insists Morecroft. “We’ve always been trying to promote a message of compassion and togetherness. We've always been eager to celebrate our differences but also to highlight the disproportionality that is only increasing in the world. Maybe that message has been hidden, so now we’re planting our flag in the ground, which is something that’s become more and more important to me as I grow older and stronger in my views, as well as bolder in what I’m prepared to say.”

On the other hand are the villains of our contemporary story, the hypocritical and narcissistic power-mongers who are willing to sacrifice the rest of humanity for their own personal gain. In Morecroft’s native England, of course, that venality has been thrust into the glaring spotlight by the Brexit referendum (the results of which almost immediately led Morecroft to take up residency in Italy); across the Atlantic it’s been accompanied by the nauseating rise of Donald Trump. And the album arrives as these same leaders’ reckless self-interest has condemned their populations to suffer through a global pandemic.

“This fragility hovering just below the surface suddenly comes bursting upwards with the slightest push,” Morecroft describes. “All over the world, the cracks have deepened. They were there the whole time but we’ve really become aware of them because of social media and everything becoming more polarized. Politicians used to have to at least pretend to be statesmen, to pretend that they were trying to do things for the good of the entire population. Now the whole thing is blown wide apart and it doesn't seem to matter anymore.”

In response, Morecroft has crafted his most hard-hitting gut-punch of an album to date, one that is as excoriating in its anger as it is maniacally infectious in its raucous, darkly celebratory spirit. It’s no wonder that the band’s mascot is the nightmare-fueling jester Mr. Giggles, who unveils his demoniac trademark dance, “The Higgly Giggly Wiggly Woo,” on Hiding In Plain Sight – to be demonstrated in all its unhinged glory on stages around the world once such things become possible once again.

The reverberant echoes of Powling’s sax opens the album on “Deeper,” soon to be accompanied by a throttling funk-jazz groove that embodies the vitalizing ebullience of the contemporary UK scene, with a tinge of strobe-lit EDM around the edges. A grungy bassline hurtles forward into “Pomped Up Freddy,” a proud acknowledgement of one scribe’s disparaging comparison of Morecroft to the immortal, semi-eponymous Queen frontman. “I didn't take as an insult at all,” the bandleader insists. “I couldn't have ever dreamed of being compared to Freddie Mercury.”

“Where Am I” layers a sharp-tongued sax melody over a delectably filthy bed of keys and bass, reflecting the influence (direct and indirect) of producer Liran Donin and his band, Led Bib. “Sex Lies Lies and Lies” is the most explicit intermingling of the personal and professional, its Italiano ravings lashing out at both the political and the personal circumstances that led to Morecroft uprooting his life and settling in Rome. “The Kipper and the Pie” is also directed scathingly homeward, referring to a pair of barefaced lies spun by PM Boris Johnson in hawking the disastrous Brexit vote.

Following Mr. Giggles’ disruptive danceathon, “Vendetta” brings the album’s more violent tendencies to a knife-edged culmination, before allowing the mood to swing in a more optimistic direction with “Europhiles,” a heartbroken but unabashed love letter to the band’s admittedly troubled home. “Onward” lifts the occasion even higher, pointing to a brighter future that WSP not only hopes for but believes in, whole-heartedly.

“We’ve always been here,” Morecroft repeats, “and the ultimate message is we’re not going away. We’ll continue to tour despite difficulties, andwe’ll continue to spread our collaborative and compassionate mission.”

WorldService Project are the leading specialists of ‘punk-jazz’ and have toured extensively through the UK, USA, China, India, Japan and Europe, receiving stellar reviews across the world for their third (For King and Country) and fourth (Serve) albums released on the highly prestigious RareNoiseRecords.

Bandcamp Daily  your guide to the world of Bandcamp

Benji B talks about his new compilation ‘Deviation Classics’